One native Australian composting worm, perionyx excavatus, also known as spenceralia, is commonly called Indian Blue or blueys.  This worm species happens to be the fastest breeding worm in general composting use (1 worm produces 18 worms per week in ideal conditions). This worm also eats faster than any other generally available composting worm.  When you are converting organic waste into worm compost in as short a time as possible, then you can't beat this worm. However, this worm prefers warmer climates and is likely to crawl from its bedding if conditions are not right for it. The Indians can grow up to 150mm long.  If you live in a warmer climate, you can just use these worms. 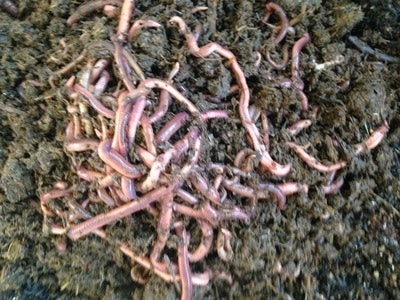 These can be sourced from Kookaburra Worm Farms, in Queensland.  They are suited for warmer climates so not sure how they would go down south (I'm Qld).  Kookaburra WF sell a mix with up to 5 different species and includes the Australian.

Within the soil surrounding your Subpod, you will likely find non- composting native worms as they will inhabit the deeper soil layers of your garden and will not be competing with the composting worms supplies for the Subpod.